Thaysen's and Raha's appointments as business presidents are effective immediately, and both will continue to report to president and chief executive officer, Mike McMullen.

"I am very pleased to draw on Agilent's exceptional internal leadership bench to find such proven leaders as Sam and Jacob, to lead two of our major businesses on the next phase of Agilent's growth journey," said McMullen.  "They both have deep industry knowledge, solid scientific grounding and business savvy in running large organizations," he said.  "Both Sam and Jacob are known for their strong leadership, and I am particularly excited about the fresh perspectives they bring to build on Agilent's strengths across our markets."

"The breadth of technology covered by the LSAG teams is very exciting.  LSAG has an incredible track record of innovation and technology leadership," said Thaysen.  "I am honored to join this high caliber team and tell the stories of how our technologies are improving the human condition around the world."

"It is clearly a very exciting time at Agilent, as we begin our next phase of business growth," said Raha. "Diagnostics and Genomics are critically important to solving global health issues, including the fight against cancer," he said.  "I am enthusiastic about this business, and impressed by this team's knowledge and passion for their work.  I am delighted to have the opportunity to work with them and help DGG drive customer outcomes that can make a tangible difference in improving people's lives."

Jacob Thaysen is a recognized industry leader in life sciences and diagnostics markets.  Since joining Agilent in 2012 as part of the acquisition of Dako, a Denmark based cancer diagnostics company, Thaysen has been an integral part of Agilent's transition into a life sciences company.  Through his strategy-driven business leadership, complemented with his deep understanding of commercializing workflow solutions, Thaysen built a solid foundation for growth for Agilent in diagnostics and clinical science.  Most recently, as the Senior Vice President of Agilent and the Group President of the Diagnostics and Genomics Group (DGG), Thaysen delivered 12 consecutive quarters of robust growth and transformational operational efficiency improvements.

Prior to joining Agilent, Thaysen was corporate vice president of R&D at Dako.  Before that he was founding partner and chief technology officer of Cantion, a research and defense application development company, based in Denmark.

Thaysen holds a M.Sc. and Ph.D. in physics from the Technical University of Denmark.

Almost exactly one year ago (May 1, 2017), Sam returned to Agilent after a decade of business leadership roles at other notable life science companies.  He joined to lead the Strategy and Corporate Development team that would help the company create its first long range strategy and more aggressively seek acquisitions that strategically enhance Agilent's offerings to customers.

Prior to re-joining Agilent, Sam was vice president of global marketing at Illumina, a San Diego-based life sciences company.  He was responsible for product management, clinical and corporate marketing; marketing operations and strategy.  He also led the successful go-to-market strategy and launch of many impactful products, including multiple sequencing systems and consumables.

Prior to his years at Illumina, Raha was vice president and general manager of the genomic assays business unit at Life Technologies, with P&L responsibility for the TaqMan™ franchise and next generation qPCR instruments and solutions.

Earlier in his career Raha was vice president and general manager of Agilent's Americas Field Operations with responsibility for sales, regional marketing and customer support for the Life Sciences and Chemical Analysis Group, a position he held from 2004-2007.

Raha earned his MBA from Santa Clara university and has an undergraduate degree in molecular and cell biology from the University of California, Berkeley.

Agilent Technologies Inc. (NYSE: A) is a global leader in life sciences, diagnostics, and applied chemical markets. With more than 50 years of insight and innovation, Agilent instruments, software, services, solutions, and people provide trusted answers to customers' most challenging questions. The company generated revenues of $4.47 billion in fiscal 2017 and employs 14,200 people worldwide. Information about Agilent is available at www.agilent.com. 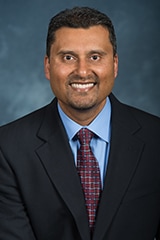