Cancer Genomics: The long and winding path to truth, from visible defects to neoantigens 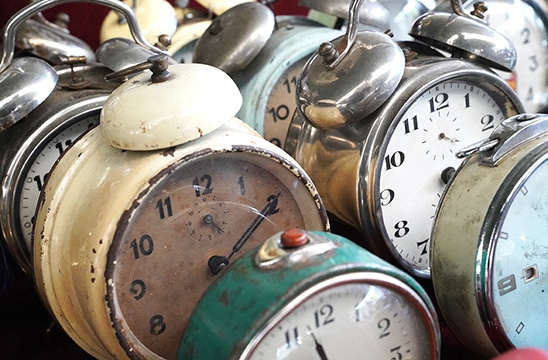 They used to be all over Paris, at least in the quartiers where people really lived; small, nondescript shops with a sign, "Bricoleur". Inside they were filled with merchandise – random and dusty, but useful – at least, in theory, to someone.

The great François Jacob – a founder of molecular biology, hero of the French Resistance in World War II, and longtime Parisian – talked about bricolage, or tinkering, as he translated it. "The tinkerer picks up an object which happens to be in his stock, and gives it an unexpected function. Out of an old car wheel, he will make a fan; from a broken table, a parasol". This was not just a sentimental reminiscence by Jacob, but a fundamental statement about evolution and its contingency. "This process is not very different from what evolution performs when it turns a leg into a wing, or a part of a jaw into a piece of ear".

To anthropomorphize, evolution doesn't engineer, it "tinkers" with whatever gene is already in an organism's genome by randomly mutating it. "In contrast to the engineer, evolution does not produce innovations from scratch. Natural selection has no analogy with any aspect of human behavior. If one wanted to use a comparison, however, one would have to say that this process resembles not engineering, but tinkering, bricolage we say in French… making a lung with a piece of esophagus sounds very much like a making a skirt with a piece of Granny's curtains."1 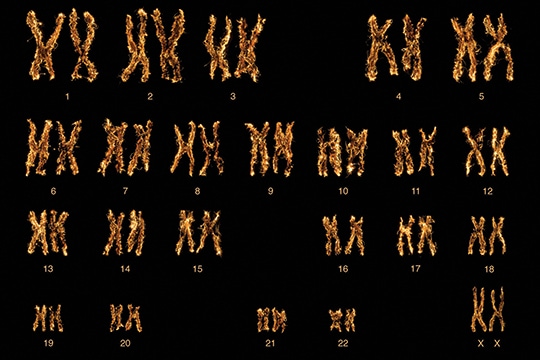 The haphazard accumulation of genetic changes, some vanishingly small fraction of which drive what appears to be a purposeful trajectory, does indeed seem like making a skirt from Granny's curtains.

And, like bricolage, when things go wrong, they can go really wrong.

The development of our understanding of genetic involvement in cancer parallels the development of our understanding of genetics and molecular biology itself. In the late 19th century, when the connection between metaphase chromosomes and heredity had been made, examination of condensed metaphase chromosomes in rapidly dividing cancer cells revealed aberrant chromosomal structures. Shortly thereafter, Theodor Boveri2 proposed that the acquired chromosomal abnormalities caused cancer, triggering the cell to divide uncontrollably. How this occurred remained to be determined.

The demonstration by Novinsky that cancer could sometimes be transmitted from one dog to another actually predated the work on chromosomes. Transmissible cancer seemed like an infection. Then in 1911, Peyton Rous3 showed that "small quantities of a cell-free filtrate" transmitted sarcomas from one chicken to another. Cell-free infectious agents, contagium vivum fluidum, were first called viruses in 1898,4 but it wouldn't be until 1935 that electron microscopy demonstrated that viruses were actually discrete particles. So, was cancer really an infectious disease?

Just as Boveri and Rous were publishing their conflicting theories, Phoebus Levene was postulating one of the greatest red herrings in the history of biology: the infamous tetranucleotide hypothesis. This made it "obvious" that any molecule as simple as a nucleic acid couldn't possibly be the carrier of genetic information. The nucleic acid seen associated with chromosomes was clearly some sort of structural element, and yet-to-be-identified protein(s) were the physical basis of genes.5 But what did any of this have to do with cancer? 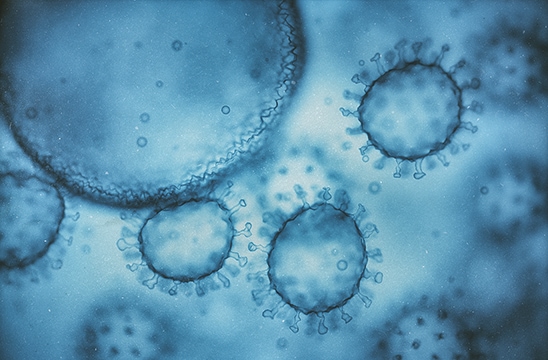 Getting the foundation right (sort of)

It wasn't until the late 1940s that molecular genetics started to become clearer and, to us, more familiar. Avery, Macleod, and McCarty, and separately, Hershey and Chase, demonstrated definitively that nucleic acids are the carriers of hereditary information. Then Erwin Chargaff's quantitative analyses of the base composition of DNA from different organisms demonstrated the well-known Chargaff's rules, which not only disproved the tetranucleotide hypothesis but also served as the essential insight upon which Watson and Crick based their model for the double helix. Thus, DNA makes RNA makes protein. Then, with the discovery of reverse transcriptase, we learned RNA makes DNA makes RNA makes protein. But what does any of this have to do with cancer? 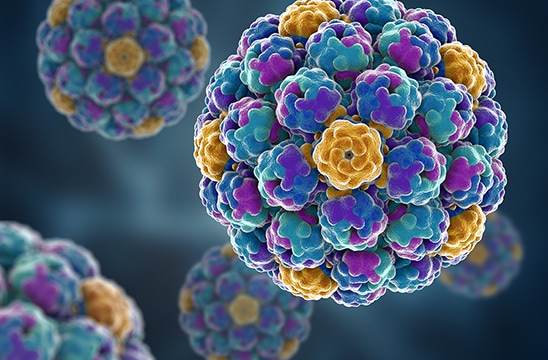 Rous sarcoma virus (RSV) is, like most viruses, relatively simple – just four genes. Mutational studies in the lab of Vogt5 showed that one of the four genes of RSV, a gene they called src or sarc, was responsible for the tumor-causing properties of the virus. Mutate src, and the virus could still infect but no longer caused cancer. So, the src gene incorporated into the cellular genome "causes" cancer. They called src an oncogene – a gene responsible for cancer.

But Peyton Rous, of all people, didn't believe cancer had a genetic cause. Finally awarded the Nobel prize in 1966 over 50 years after his discovery of RSV (interest in which was re-ignited by mutational analysis), he could not accept a genetic basis of cancer. In his Nobel address, he stated flatly:

"A favorite explanation has been that oncogens* cause alterations in the genes of the cells of the body, somatic mutations as these are termed. But numerous facts, when taken together, decisively exclude this supposition."6

*Not to be confused with oncogenes. Rous insisted on using the word oncogen (without an e) to describe chemical agents which cause cancer instead of the universally used term carcinogen

Then came the leap that makes all the pieces fit. The groups of J. Michael Bishop and Hal Varmus at UCSF showed that an analog of the src gene was already present in the avian genome7, and as they looked more broadly, in the genome of seemingly every animal. The endogenous oncogene – that is, proto-oncogene – is like a ticking time bomb in the cell. Mutate it, through mutagens, UV irradiation, or just the bad luck of an error in replication, and it causes cancer. Finally, a molecular-level explanation had emerged. Since Varmus and Bishop, about forty other proto-oncogenes have been discovered. Forty potentially catastrophic failures ticking away like time bombs in the nucleus.

Cell fusion experiments carried out by Henry Harris, among others, in the late 1960s showed that the fusing of a normal cell with a cancerous cell suppressed the tumorigenicity of the cancer cells. Then, in a landmark study of the retinoblastoma, Alfred Knudson used the rate of onset of retinoblastoma in children with a family history of retinoblastoma vs. those without to develop the "two hit" theory, i.e., that it takes two mutational events to cause retinoblastoma. For a heterozygous child, who has one normal copy of the gene and one already mutated copy, it takes only one additional mutation to cause retinoblastoma. In contrast, a homozygous child with two normal genes requires two mutational events, which should therefore take longer given a constant rate of spontaneous somatic mutation. Figure 1 in Knudson's seminal 1971 paper8 must be one of the most consequential and beautiful curve fits in the history of biology, and clearly shows the predicted behavior. Two copies of a gene must be (as we would say today) "knocked out" by a mutation to cause cancer, just as expected from Mendelian genetics if the mutated gene was recessive (loss of function).

"Aha" is a palindrome

Built-in potential for catastrophic failure in the event of predictable events; what engineer would design a system like this? We now know that proto-oncogenes and tumor suppressor genes code for kinases, transcription factors, or other essential proteins involved in cellular regulation. Mutations in them cause dysregulation of finely tuned cellular control networks. Increasingly, we can map out the cellular dysregulation caused by these mutated proteins, such as changes in protein phosphorylation altering signal cascades, altered metabolism, and intracellular transport, leading to changes in metabolite concentrations, etc. This ability to finally link oncogene and tumor suppressor mutations, especially driver mutations, to changes in cellular physiology and the extracellular tumor microenvironment allows us to create a comprehensive picture of tumor cell physiology.

Of course, transformation and tumorigenesis require multiple mutational events, so just one single mutation is unlikely to transform the cell. Indeed, tumor mutational burden (TMB) – how many somatic mutations a given tumor cell has – is now an important biomarker for predicting therapeutic response. Recently, some researchers have been attempting to target cancer cells by targeting HLA peptides from the mutated oncogene or tumor suppressor, which they refer to as neoantigens. Two very recent publications from Johns Hopkins in the journals Science9 and Science Immunology10 demonstrated that T-cell engaging bi-specific antibodies are capable of binding to HLA-presented peptides from a mutated oncogene, or tumor suppressor proteins, and in some cases showed activity in vivo.

Clearly, when it comes to cancer, bricolage is a game for two.

1 All of these quotations come from François Jacob's book The Possible and The Actual pp. 34-35, University of Washington Press, 1982

6 Peyton Rous "The Challenge to Man of the Neoplastic Cell" available at https://www.nobelprize.org/prizes/medicine/1966/rous/lecture/

Characterization of a tumor's genotype means looking at multiple loci in many genes. The Agilent SureSelect Cancer All-in-One Solution enables you to detect genetic variations (SNVs, indels, CNVs, and translocations) in the genes clinically relevant to specific tumor types, based on guidance from the National Comprehensive Cancer Network (NCCN), the College of American Pathologists (CAP), and the European Society for Medical Oncology (ESMO). You can also design your own custom assays.

For genetic characterization of inherited cancer, the SureSelect Human All Exon V8 panel provides comprehensive and the most up-to-date coverage of protein coding regions.